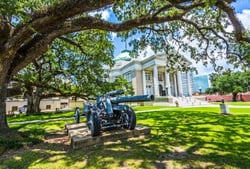 While several American Indian tribes are known to have lived in the area occupied by present-day Lake Charles, the first European settlers arrived in the 1760s. In 1781 Martin LeBleu and his wife, Dela Marion, of Bordeaux, France were the first recorded Europeans to settle in the area now known as the LeBleu Settlement. Charles Sallier, one of the first settlers, married LeBleu's daughter, Catherine LeBleu; the Salliers built their home on the beach in what is current-day Lake Charles, LA. The area on the east side of the Calcasieu River was defined as the southern part of the "Neutral Ground" until the ratification of the Adams-Onís Treaty that was ratified in 1821. The infamous pirate, Jean Lafitte, once delivered stolen slaves and contraband to James Bowie and other plantation owners in the area. By 1860 the area becomes known as Charles Town in Sallier's honor.

On March 7, 1861, Lake Charles was officially incorporated as the town of Charleston, Louisiana. The city's growth was fairly slow until Captain Daniel Goos, a Frisian by birth, came to the city in 1855. Goos established a lumber mill and schooner dock, in what became known as Goosport. He promoted a profitable trade with Texan and Mexican ports by sending his schooner downriver into the Gulf of Mexico. Until the arrival of Goos, a man named Jacob Ryan dominated the lumber industry. Between 1817 and 1855, timber sales from longleaf pine and bald cypress remained the city's primary source of economic revenue.

By the time of the U.S. Civil War, many Americans from the North, along with a large influx of continental Europeans and Jews, had come to settle the area. Attitudes toward slavery in Lake Charles were mixed, as slavery was secondary to business interests. In fact, fewer than five percent of the population were slaves. Many citizens became involved in the war. Some local families supported the Confederacy, while others supported the cause of the Union.

In the years following the Civil War, Lake Charles regained its status as a lumbering center. Using the pine wood from the city's mills, construction of large Victorian mansions transformed Lake Charles during the 1890s. Carpenters competed with verve to out-build each other with their use of elaborate fretwork and decoration. The area of present-day Lake Charles located just east of downtown is known as the ''Charpentier'' Historic District from the French word for carpenter and features unique homes from this era.

Lake Charles suffered extensive damage from Hurricane Rita, which struck the city as a Category 3 storm in early September 24, 2005. On September 22, the mayor ordered a mandatory evacuation of the city, and approximately ninety percent of the residents left. As part of the city's recovery from Hurricane Rita, elected officials proposed a plan to renovate the downtown area to make it more attractive and pedestrian-friendly.

And while you’re researching the history of Lake Charles Louisiana, if you’re in need of office products or IT Support Services in Lake Charles, AOP is here to guide you. Call or schedule an appointment to meet our trusted team. We look forward to hearing from you!

Click the link below to request a quote from the AOP team. We offer custom tailored solutions and plans for your business needs.